Home › Uncategorized › The Challenge Wants To Get Too Big

The Challenge Wants To Get Too Big 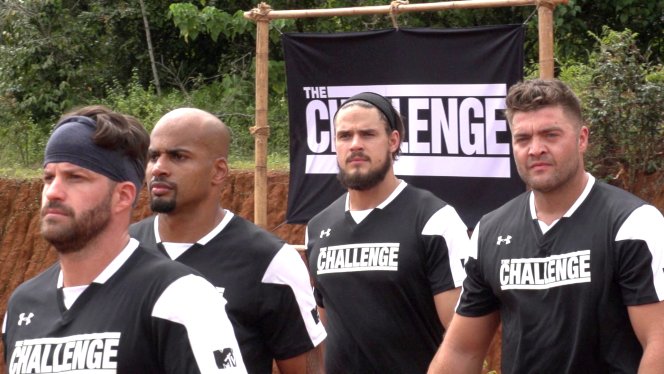 This one time, on MTV’s The Challenge, a human drank another human’s workout sweat. The person who drank the sweat procured the beverage from the other person’s shirt. It’s only happened one time, but it definitely happened and it happened in the middle of an episode for just $75 in return, which means that it was deemed a Middle-of-the-Episode level of fucked up and it also means that these types of things can theoretically happen on The Challenge. To reiterate, a human will drink another human’s sweat on The Challenge for exactly $75.

It won’t happen frequently, but it’s certainly in the cards.

That’s a long way of saying that I watch The Challenge. I’ve written about it before, and I’ll write about it again. I would say that I’m not proud of this fact, but I’d be lying.

And my affinity for the show means that this is a safe space for The Challenge talk. It’s my favorite thing on TV that doesn’t feature an “unlawful dissemination” live-read or a scoreboard in a corner. That might sound ridiculous to some people, but I don’t entertain those people’s opinions because they’ve clearly never watched The Challenge and if they had watched it and they still harbor those indefensibly warped opinions, then they’ve watched it wrong and that’s OK because we don’t need them anyway. And by “we” I have literally no idea what I mean1.

With all that being said, this past season wasn’t very good, at least in regards to the show’s body of work2. Titled the “Invasion of the Champions” or something like that, it involved a cast of relative unknowns sleeping in a stray dog-infested gazebo under mosquito nets by night — not the shitty part, people still got down under the mosquito nets, because it’s The Challenge and for zero other possible reasons — and battling it out to gain delayed entry to a mansion called The Oasis by day. Little did they know, there were eight past champions training with GoPros waiting to fly to Thailand, because twists.

The Champs team consisted of Camilla, Laurel, Cara Maria, Ashley Zach, CT, Darrell and, of course, Johnny Bananas, which is a great cast. The Underdogs team was made up of the requisite spare parts from past seasons of the Real World, Are You The One?, and, somehow, Road Rules3.

After a string of forgettable challenges, the Champs showed up, only to be forced into impossible-to-win games4 against an objectively bizarre collection of castoffs who constantly got excited about beating the Champs even though the odds were laughably stacked in their favor every single time.

(This is probably a good time to mention that this Island of Misfit Reality TV Participants from A Variety of House Full of Strangers Shows isn’t necessary. I’ve proposed a solution to this issue, tentatively dubbed “The Challenge: Minor Leagues,” that would either adequately prep actual contenders or ruthlessly filter out the contestants that shouldn’t be on such a goddam treasure of a show. That way, the entire Real World alumni roster could keeping getting checks and the human-ish, allegedly organic-based lifeforms from Are You the One? would stop invading The Challenge like fucking locusts. Anyways.)

To confuse matters further, the eliminations involved teammates, and if you’re still reading this, holy shit you love The Challenge. Ultimately, CT won the guys’ side — capping the most improbable image rehabilitation tour since Glen Beck’s Full Frontal turn — and Ashley won the girls’ prize — also improbable, but in a “How did my dog pee in a coffee mug sitting on the floor?” kind of way — but you knew that already, because again, holy shit, you’re still with me.

But that, mercifully, brings me to my next point. Tonight, The Challenge: Champs vs. Pros starts, and I’m both excited and hesitant. I’m excited because it’s more The Challenge, and I literally can never think of a situation in which I wouldn’t want more Challenge and, it seems, the chance to take on some professional athletes got some past show favorites involved, which is also exciting.

I’m hesitant, however, because this doesn’t feel quite right. Bill Simmons has long-claimed that The Challenge is America’s fifth major American sport, and I have absolutely nothing but support for the assertion. They kind of are pros. Johnny Bananas once compared himself, without irony, to Michael Jordan. So, with that as a baseline, I don’t think that The Challenge needed this validation. Is it dope that Victor Cruz is going to be TJ this time around? As a Giants fan, I kind of wish our wideouts would just fucking practice football, but sure, it’s kind of dope. I don’t hate it at least. And is it cool that CM Punk and Lolo Jones and Gus Kenworthy and Shawne Merriman(!) are going to be going up against CT and Darrell and Jordan and Wes? There are very few things that are cooler, actually. And I don’t even think that the Champs are going to get blown out. Zach would help, but even still.

This setup doesn’t feel quite right because it either feels like The Challenge is getting too big or it’s trying to get Too Big. Like, they could literally run back their Greatest Format Hits — Rivals, Free Agents, Seasons and Ex’s — in a rotation and I don’t think anyone would really complain. The formula was never broken, but they keep trying to figure out exactly what numbers will break it.

I suspect that in two hours I’m going to be writing iPhone notes about how this revolutionized the entire franchise, potentially opening the door for a season-long Shawne Merriman appearance, which would then prompt Wes to start using steroids again, regardless of participation, and how CM Punk and CT should probably just reboot Cheers together.

But as it stands, I kind of just want The Challenge to be great again.

(This was 100 percent a 1,200 word distraction to get me away from the news that our country’s moral infrastructure is crumbling like a fucking sandcastle. I think it worked. Jake Tapper’s cartoon this Sunday is just going to be a completed game of Hangman with U S and A to the left of it. Yeah, it didn’t work.)