Home › Basketball › NO MORE TANKING PLZ K, THANKS: The Knicks are unwatchable

NO MORE TANKING PLZ K, THANKS: The Knicks are unwatchable 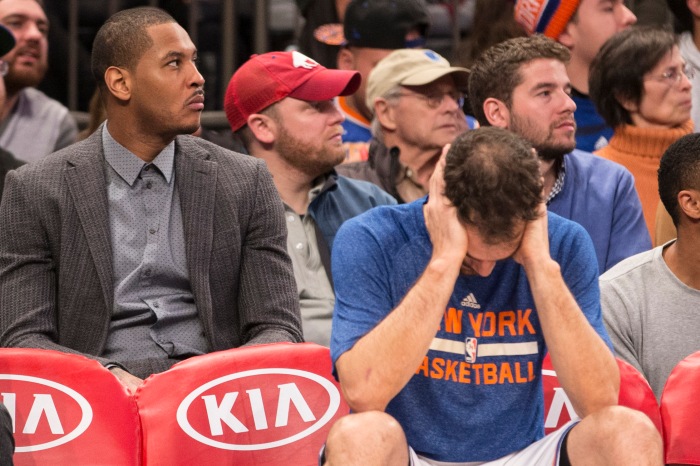 At their current pace, the Knicks won’t have a difficult time securing a losing record before the Super Bowl kicks off on Feb. 1. They play 13 times between now and then — seven of those against teams with winning records, five against teams that don’t have winning records but do fit comfortably in the obtuse “Better Than the Knicks” subcategory and one against the 76ers, literally the only team outside of the two aforementioned groups — and based on their current .139 (5-31) winning percentage, they stand to win between one and two games in the month of January.

A 2-11 record for the Knicks over any stretch in 2014-15 is, as their record would indicate, the statistical norm. In fact, if they were to somehow win three games in the month of January, the achievement would match their best 13-game stretch of the season (they opened at 3-10, which is somehow turning out to be a high-water mark).

This is all a very long way of saying that the Knicks are terrible. Also, they’re indefensible. And bad at defense. And consistently confused. And a traffic jam of marginal talent. And borderline unwatchable.

Even Clyde seems bored. The reveal of his sartorial decisions he makes are now undeniably the A-Plot of a Knicks broadcast1.

But this is all justified in the hearts of fans, executives and — the Tim Hardaway Jr.-Carmelo Anthony feud notwithstanding — players by the murky promise of tanking.

As a Knicks fan, I’m not terribly angry. At least the front office seems to have a plan, and a plan that doesn’t involve borrowing spending tactics from Scott Storch and Supermarket Sweep, which is more than can be said about previous regimes.

(Yes, I realize I’m lauding the existence of a plan that isn’t even a real thing yet, but when you’re stuck in the max-sec prison of Knick Fanhood, the mere discussion of an escape plan is worthy of whatever celebration comes immediately before a ticker tape parade. Back to being pessimistic.)

The problem with tanking, however, other than the fantastically ugly product it forces onto the gorgeously lit Madison Square Garden court far too frequently, is that I’m just not sure it works.

Like, I know that the framework makes sense and all, I know that Sam Hinkie and his army of Edward Calculator-Hands are very much smarter than me, and mediocrity is pretty terrible. I also know that the only way to have a chance at a LeBron James, a Tim Duncan or an Anthony Davis is to be bad enough to win a lottery, because that’s how things work. And it’s also admittedly difficult to bring in new talent when your books are clogged with the cholesterol of unjustifiably bad contracts.

The easiest documented way to improve drastically — see Thunder, Oklahoma City — is to be really bad for a short period of time in the hopes of acquiring young, inexpensive but talented players. The time spent in the Medieval NBA will allow those young players to blossom without the fear of failure, because of the whole failing-on-purpose-to-get-better thing, and then eventually that Caterpillar of Shittiness will turn into a Butterfly of Beautiful Pin Downs and Unstoppable Drives.

This tanking scenario all sounds good in a vacuum, but so do lots of terrible things that don’t actually exist in vacuums. For instance, in a vacuum, alcoholism doesn’t sound too bad. Myriad artists, musicians and writers did some of their best work while wasted. Stephen King supposedly didn’t remember writing Cujo and Cujo is awesome. In fact, it’s far harder to come up with sober creative-types that did great things than decidedly unsober ones. But we also know that alcoholism doesn’t live in a vacuum and that alcohol is not good and it also killed many of the wonderful people who created wonderful things while relying on it.

Tanking isn’t quite NBA alcoholism, but it’s a far more quixotic endeavor than the people heading the expeditions would like us to believe.

And that’s for two reasons. First, for tanking to be successful, an unpredictable future must be leveraged, and therefore quantified. Quantifying an unknown is terrifying. And secondly, a successful tank requires that the Future Ship must be piloted by someone who actually knows what they’re doing. That’s where the biggest tanking problem arises: The evidence that there is an abundance of those types of people is pretty much non-existent.

In other, other words, it’s super hard to win an NBA title, and like other endeavors featuring professionals paid to do a job, certain individuals excel far more than the rest.

Those individuals aren’t hard to spot. Phil Jackson has his name attached to 11 trophies. Pat Reilly is on or around six of them. Greg Popovich has five. Rudy Tomjanovich, Chuck Daly and Eric Spoelstra each have two. The math indicates that six non-players are essentially responsible for nearly every NBA title since 1985.

And by “truly lottery-aided,” I mean teams who’s rosters were significantly bolstered by either winning or finishing high in the lottery. The lottery yields for those teams — Tim Duncan and Dwayne Wade — proved invaluable to later championship runs.

Even before Wade became one of the Big Three, he averaged 41 points per game over the course of 2006 NBA Finals en route to one of the biggest finals’ upsets of all time. The Heat were terrible after Alonso Mourning’s kidneys tragically started failing him, and Wade (plus the acquisition of Shaquille O’Neal) resurrected that team much more quickly than one would’ve expected. Count the Lottery as friendly to the Heat.

Tim Duncan, on the other hand, is far weirder than Wade in regards to origin stories. In 1987, the Spurs won the Lottery, and with the top pick, they selected David Robinson, a center from Navy. Robinson was an incredible basketball player who brought the Spurs to new heights, but not championship heights. In 1995-96, the Spurs went 59-23 and made the Western Conference Semi’s. But in ’96-97, Robinson got hurt and the Spurs went into full tank mode. The fruits of their despondency was the top pick in the 1997 NBA Draft, which was Tim Duncan. In ’97-98, Duncan’s first season, the Spurs went back to the Western Conference Semi’s, and in his second, they won their first of five titles.

To recap Duncan’s situation: He was drafted onto a 50-win team that was intentionally a 20-win team for a single season, helped turn that team back into a 50-win team (with the help of a Hall of Fame teammate still in his prime) and then subsequently took the torch when torch-taking was required of him.

And I would actually argue that tanking helped the Spurs, it didn’t make them. Their second-wind was comprised of a core featuring Duncan, obviously, but also a guy selected 28th overall following a 58-win season (Tony Parker), and a guy drafted 57th overall in 1999 then stashed in Italy for a few seasons (Manu Ginobli). Sure, winning the lottery is nice, but drafting Tony Parker or Manu Ginobli after every single NBA team has passed on them once is nice too.

Back to the Knicks: Since 1985, they’ve drafted three players that subsequently went on to make an All-Star Game4 in their entire careers. Three. Patrick Ewing, Mark Jackson, David Lee. Of those three, only Ewing was a lottery selection. David Lee was taken 30th overall, which should say something but miraculously doesn’t.

They’ve picked in the Lottery eight times in 29 years, and only one of those picks has turned into a legitimate NBA star. This is the team that turned the 20th pick in the 2006 draft into Renaldo Balkman while Rajon Rondo was still on the draft board.

The Minnesota Timberwolves, the Western Conference’s rusted beacon of ineptitude, have picked in the Lottery 12 times since 1995 — the year they drafted Kevin Garnett — and have drafted themselves just one All-Star5 Their last four Top-5 picks have yielded them Kevin Love and nothing else, thus far. But they’re not the only dummies with license to employ.

The Pistons have picked in the Top-10 every year since 2010. In those drafts, they’ve passed on Paul George, Klay Thompson, Draymond Green, Michael Carter-Williams, Giannis Antetokounmpo, Dennis Schroder and Mason Plumlee, among others.

The 76ers actually seem to be extolling the virtues tanking as a smart strategy, which seems eerily similar to framing used toilet paper and calling it art. They currently look nothing like what they will supposedly look like in the next two-four years. Or something. What they’re doing is genuinely confusing, but at least they’re confusing with K.J. McDaniels on the floor, who is genuinely more entertaining than the entire Knicks roster.

But I’m not trying to be unnecessarily negative in regards to tanking. When things get bad, it seems like a relatively sound strategy for those in charge to insist on the notion that being bad is actually being good.

It is tough to get behind the New York Fury, however, when those driving the doomed the tank are nitwits. Same goes for the rest of their Tank Cavalry.

In the film adaptation of Bret Easton Ellis’ insanely depressing Less than Zero, Robert Downey Jr.’s Julian, a drug addict, is in the hole to James Spader’s Rip, a drug dealer, for $50,000. He goes to his uncle to pitch him a nightclub idea that would require a substantial loan. His uncle knows what’s up. He knows that Julian the Drug Addict is a bad investment. He knows that no matter how much money Julian has, it will all end up in the same place: up his nose or down the toilet.

As a Knicks fan, I think that’s what I’m most afraid of. It’s not that tanking doesn’t represent an alternative to mediocrity, and one with a far more favorable endgame, because it does. It’s just that, to get to the endgame, the Knicks are going to have to make good decisions — and a lot of good decisions, in the draft, in free agency, within their own organization — and even with Phil Jackson in charge, it feels like a far more difficult fix than simply existing through one intentionally bad season.

But what it disregards is the present, the certain and the concrete.

I have trouble believing that an economic analyst would value unused, unassigned draft picks the way that NBA teams do, but I also can’t imagine them disregarding entities that require no projections as often as NBA teams do either.

Tanking sounds like a good idea, in theory. But when the product looks that bad and guarantees absolutely nothing, it’s tough to get behind in actuality. Sure, tanking must work for some people, but exceptions shouldn’t be made the rules.

And the only rule for NBA success in the past 30 seasons has been this: Smart people make smart decisions, waste less and capitalize off more. If you don’t have one of six smart people, you’re in trouble.

So instead of trying to get bad to be good, why can’t some teams work on getting good to get better?

Like Loading...
‹ 10 plausible explanations for Lebron’s non-superhuman play when one considers that Lebron is most definitely a superhuman
College Football Championship Preview: The Definitive Cable Rob Lowe Power Rankings ›