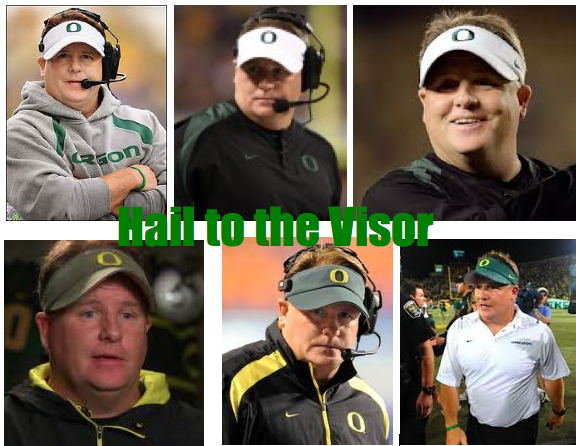 Chip Kelly is back.

Not since Jerry Garcia fell in love with Mountain Girl have the good people of Eugene had so much to rejoice about. The Rose Bowl was nice, and so were the Olympic Trials, but not since the World’s Most Famous Hippy found love in this hopeless place has someone simply deciding to stick around town been front page, first block, jump-around-in-exultation worthy news. Usually someone sticking around just means that something went wrong in what was supposed to be their final term.

But not today. According to sources, Chip Kelly, Big Balls Chip, the Visored Vigilante of the Non-SEC, isn’t going anywhere.

As of this morning Kelly had rebuffed all advances made by the Browns, the Eagles and the Bills in their efforts to lure him to the NFL. ESPN broke the story at around 10:30 a.m.

To date, he has officially spurned four different NFL teams, which either means he loves Eugene or it means that the offers that have come his way have been about as enticing as moldy muffin.

For argument’s sake, we’ll go with the latter. But intrinsically, we’ll sprinkle in a bit of the former.

After all, his base salary comes in at $3 million a year, the new window-walled Phil Knight Monument in Dedication of Really Fast Football is near completion, he has a handful of really fast recruits to play really fast football waiting in the wings, and — most importantly — he has a redshirt freshman quarterback that fits the “awesome” mold.

Is this a total homer point of view? Probably. But who cares. The Ducks just bought themselves another year.