Home › Coach's Diary › Jeff Tedford’s Diary: Letters from a Bear on the way out

Jeff Tedford’s Diary: Letters from a Bear on the way out 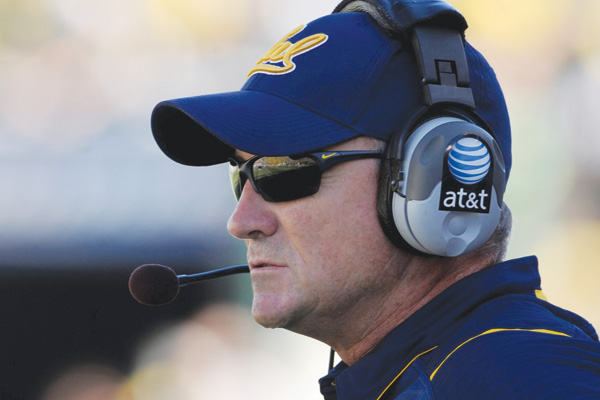 The Coach’s Diary series takes us past the interviews, the fake smiles and the rehearsed responses, and delves deep into the things Pac-12 coaches don’t say to the media.

Following Cal’s 59-17 loss at the hands of Oregon, Cal head coach Jeff Tedford retreated to his cave located directly beneath Tightwad Hill, and begin to write in his Bald Eagle feather-clad notebook.

We at QuackTownUSA, through rigorous investigative work, consistent neglect of trespassing laws and little regard for the validity of our sources, have obtained this diary entry.

I’ve been holed up here for about 36 hours now, and my supply of Fun-Dip is running dangerously low. Fun-Dip is essential at this point — it’s the lone stimulant that the NCAA no longer tests for. I don’t think they test us coaches, but take it from me: you can never be too careful.

I know all about being careful. My teams have been governed by cautious principles for the better part of a decade. The numbers are on my side, I swear. It’s the execution that hasn’t panned out. Everyone knows that the most effective option in the playbook on 3rd and 8 is a strong dive right. The explosiveness can’t be underestimated.

I’m afraid, however, that the Berkeley faithful are losing faith in me. It’s just a hunch, Diary, but I’m a pretty brilliant guy and the dwindling numbers at the trustee’s luncheons don’t bode well.

But back to me being brilliant. I know it only happens in spurts, but boy do I impress myself when I get it right. Because it’s you, Diary, and I know that you see the world as it really is — as opposed to those blithering one-eyed frog trustees, fans and administrators who just don’t understand the value of patience — I can stress to you how awesome I was at stopping Kenjon Barner on Saturday. I was like the King of Awesomeness, Jeff Rad-ford, the Baddest Man in Berkeley. So some kid named Mariota beat us. So what. I’ve never heard of him.

Back to the sugar, Diary. We’ll be in touch.

Wednesday, November 14th: What to do in a world without Fun-Dip

Regardless of what you may hear, Kenjon Barner was NOT injured on Saturday. He was at full health, and I stopped the shit out of him because I rule.

And day four in the Ted Cave is not going as well as I had hoped. The contingency plans for this place allow for only three comfortable days of hiding. Now that I’ve eclipsed that mark, I am scared for my sanity. Fear not, young Diary, I shall not neglect you. My team is another story, but I feel as if my absence will not be noticed at this juncture. I left a detached scarecrow in my seat to throw off the scent.

I refuse to acknowledge football at this point — an activity I’ve become quite good at since my Ponyboy, Aaron Rodgers, left town. Jerk. — and given the state of my Fun-Dip supply (empty), I’ve instead compiled a list of fun things to do that don’t involve Fun-Dip:

I’m working on it. Just like I’m working on establishing a winning culture here in Berkeley. But I got $9 million that says I have a year or two to figure it out.

As the hippies say,

I’ve finally seen the light. No, I haven’t come to any fantastic revelations regarding the squad, but I did emerge from the cave. It was blinding. Like, actually blinding. I can barely see. The good news? Now that I can’t see, I can claim zero responsibility for whatever tragedy ensues on the gridiron in the coming weeks. I absolve myself from this moment forward.

I don’t. But I can’t even remember the first name of that Bigelow kid. I want to say it’s Deuce, but I think that’s wrong. If it isn’t Deuce, we should write a movie starring a guy name Deuce Bigelow. I think the idea has legs.

The fans certainly hate me now, though. My scarecrow ploy worked brilliantly, but I had a chance to read the papers. The good news? It’ll still cost $9 million to can me. Point, me.

Either way, I’m paid. So, Diary, what’ll it be for New Years: Reykjavik or Barbados? I hear Reykjavik rages.

Get back to me,