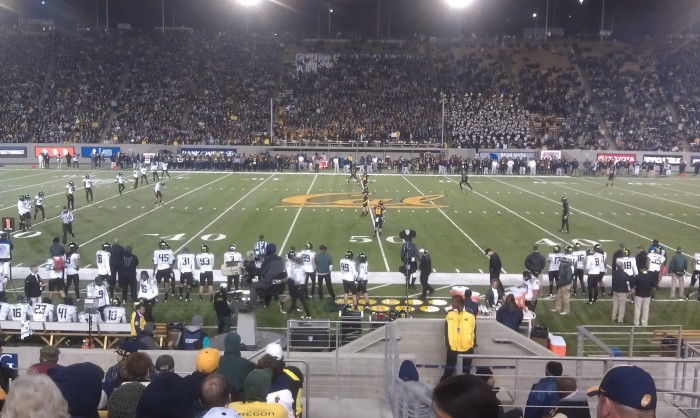 That’s what an actual, real-live Cal fan said to me during Oregon’s Saturday night rompfest in the cozy confines of a sort-of full California Memorial Stadium.

But the worst part about the interaction had nothing to do with the fan’s allegiance toward the Bears, his assumed standing within the alumnus community (he was sitting in the Stadium Club seats) or the almost aggressive way in which he announced his heartwarmingly pessimistic sentiment. It was the context in which it was uttered.

He said this with 12:11 remaining in the second quarter, with Cal trailing by just four points. The Bears were keeping up with the Ducks, they might have even been out-playing them.

Screw a black cat, Kenjon Barner went down early, clutching his hand on the way to the locker room.

Then Avery Patterson crumpled to the turf. Then Marcus Mariota was tapping his head in a feverish motion following a big hit and needed to come off the field. Yet even through it all, the Cal fans, supporters of the home team, seemed to be embracing the inevitable reality of Oregon domination. It was a nasty bit of hubris shown by the Berkeley faithful.

Stop Barner? No worries, Marcus Mariota will just throw for SIX TOUCHDOWNS then rip your heart out like Lloyd Christmas.

The first instanced of contrived panicking1 came early, when Oregon second possession ended with a three-and-out a.k.a. The three words that Chip Kelly never strings together. Ever.

And then, in the second quarter, they did it again! Both times they passed on first down. Both times a banged up Barner struggled to make up for a lack of first down production.

But (and this might be the theme for the 2012 Oregon Ducks) none of that mattered. Trying to stop Oregon’s offense is like trying to plug the baseboard of a row-boat that has just been peppered with bullets: Plug one hole, and the water just rushes through somewhere else, and it always makes up for the volume lost.

Cal put a lid on Barner for an evening, but in doing so, they allowed Marcus Mariota to throw for 377 yards and six TDs in front of an impassioned 57,672 Cal fans. The freshman QB didn’t throw an interception all game. Hell, he’s only thrown 10 incomplete passes in the month of November.

Two troubling notes on the neglected side of the ball:

1. Avery Patterson is out for the season after tearing his ACL in the second quarter of the Cal game, which immediately removes 44 tackles, three interceptions, two defensive touchdowns and a heap of experience from the Ducks last line of defense. Erick Dargan, a sophomore who has played well in a limited roll thus far, will likely get his first start against Stanford. Luckily for Oregon, Stanford isn’t exactly captained by Johnny Unitas.

2. Oregon couldn’t get to the QB, and it was totally for lack of trying. Through the first half, when the game still seemed tense (operative word there: seemed), Cal was moving the ball efficiently, and the Duck D was adhering to the “Bend but don’t break” principles championed by Monte Kiffen in the Tampa 2. But for a team not exactly known for its staunch nature on the defensive side of the football (although, I must note, their red zone defense the season has been nothing short of spectacular), this was a troubling trend.

Cal’s QB, Allan Bridgford, was starting his first-ever college game. So how does Oregon decide to rattle the kid? By allowing him enough time to check the scores from around the league while he chilled in the pocket. And he did chill in the pocket. He had issues finding targets, period, but the defense gave him every opportunity. Considering the lop-sided nature of the score, I’ll let bygones be bygones, but Nick Aliotti was consistently sending three and four-man fronts at a kid who was one effective pass rush away from needing a new pair of pants.

But I won’t harp on the negatives any longer. Friday’s game against Stanford has turned into the Pac-12 Game of the Year to this point, last week’s win over Cal was as definitive as necessary and the Oregon football program has officially gone vacuum mode on Berkeley morale.

Three straight passes from #Ducks, all inside the Cal 9. Whatever this is, its not Oregon football. #GoDucks

Like Loading...
‹ GEORGE’S PICK: Oregon @ CAL
Via the Oregonian: Avery Patterson out for the year with torn ACL ›