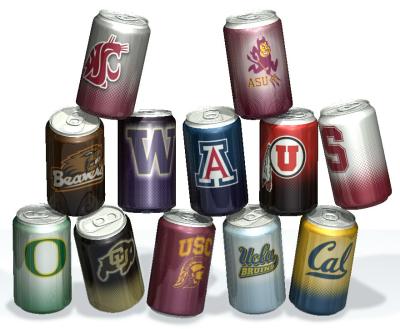 Nearly a week has elapsed since the BCS standings were released to a lukewarm West Coast reception, and little has occurred to reduce the sting of the demotion in the totalitarian poll.

Oregon did wallop Arizona State last night, 43-21, in a primetime national slot, but the Ducks did what the Ducks do: Turn the opposition into a pack of whimpering puppies before you have time to load your Twitter feed.

Which is a good and a bad thing. It’s good because it keeps the blood pressure of the Oregon faithful low, allows for the second unit to amass playing time against quality competition that rivals the minutes that non-AQ schools receive, and means that the Ducks are firing on all cylinders.

It’s bad for one reason: The Ducks have been so formidable this season, so dominant, that they have consistently made their Pac-12 opposition look like floundering Big East programs. It’s almost like the Ducks offense is so soul-crushing that everyone — the voters, the coaches, the talking heads, the computers — is almost forced to question the validity of the competition.

Prior to Thursday night, Arizona State was a fabulous up-and-coming program, led by a first-year head coach (Todd Graham) and a first-year starting QB (Taylor Kelly), that had all the appearances of a mid-season David.

But just ten minutes into the game, Arizona State’s defense could barely hold themselves up, the offense had lost all momentum and Oregon was in their regular throat-ripping form. The Ducks even negated an early fumble-turned-TD-pass when Kenjon Barner took a hand-off 71 yards to pay dirt.

Kelly, a dark horse Heisman candidate coming into the game, was upstaged at home by the Ducks fast rising dark horse, Barner, within minutes. He finished with more yards on the ground (143) than Kelly had in the air (93).

Is Oregon good? Yes. But the rest of the Pac-12? That remains to be seen.

(Whatever Puppet Master/Jinx Auditor/Universe Watchdog I just offended, please spare me. I’ve endured an ’08 Lions week this season, that was difficult enough.)

The lines are set, the points are locked, I’m ready to rock this (As always, times are PST, lines from sportsbook.ag, and my moneyline picks are in bold.):

#20 Stanford (-3) at Cal (+3), O/U 48.5, 12:05 p.m. — For whatever reason, the odds-makers love Cal at home. Statistically, there is absolutely nothing that should feed into this infatuation (1-3 against the spread at home, 2-1 on the road), but who am I to criticize. Throw out the lines for a second, and this is what we have: A game pitting a struggling-yet-minorly-resurgent home team against their cross-town rival who just came off the most gut-wrenching and inexplicable referee-decided game since… Ummm… you get the point. If Oregon was mad about the BCS shunning, Stanford has to be pissed about all that has transpired in the last five days. First, the officials failed to reward Stanford RB Stepfon Taylor with a touchdown, even though a replay clearly showed him crossing the goal line before any body part — save his feet, which, as far as I know, is still allowed — touched the turf. Then everyone agreed with the Cardinal, and then Notre Dame used the “victory” to propel themselves into a No. 5 BCS ranking (and No. 2 in the computers). Between Cal and Stanford, Stanford is the better team, but if they can’t channel the Notre Dame debacle into something focused, if they stay distracted, it could be Washington all over again. I like David Shaw to get his team together. Who I’m taking: Stanford (-3), AA, with the Over.

Ralphie has been sad/His team is super awful/Trojans win again.

Meh, I’ve done better. But seriously, the 41-point spread is infinitely more interesting than this awful game figures to be. Will Colorado score twice? Will they manage even 100 yards of offense? Will Matt Barkley throw six TDs? Will Silas Redd run for a forward-pass era record of 981 yards? These all matter within a 41 point window. I’m a fly-by-the-seat-of-my-pants kind of guy, so I’m taking Colorado. USC has been plain awful against the spread (2-4) and while Colorado hasn’t been any better I’ll roll the dice. Who I’m taking: Colorado (+40.5), A, with the Over.

Washington (+7.5) at Arizona (-7.5), O/U 63.5, 7:00 p.m. — This might, somehow, someway, be the most interesting conference game of the week. Between Washington and Arizona there is a stack of disappointing results taller than the Space Needle. Both teams started out hot, both teams managed to breach the ranks of the Top 25 fairly early on, then both suffered debilitating losses to Oregon and now are mired in losing streaks, discussing the possibility of making a bowl game. Arizona has had huge issues getting the stops when they need to, an attribute amplified to the Nth degree two weeks ago against Stanford. I like Keith Price and Steve Sarkesian in this matchup over RichRod and Matt Scott. Who I’m taking: Washington (+7.5), AAA, with the Under.

Utah (+9.5) at #8 Oregon State (-9.5), O/U 46.5, 7:30 p.m. — Oh Utah, you’ve been a fan’s nightmare and a gambler’s wet dream. With two consecutive back-door covers in their last two weeks Utah has managed to take down USC and UCLA against the spread. Warning: I accept zero responsibility for whatever appears next. Now, there is no scientific formula that I’m referencing here, it’s just a hunch. There is absolutely nothing that says that Utah should be able to keep this game within 10 points. Nothing. But they also have a great Front Seven and Cody Vaz, while impressive last week against BYU, has yet to face a defense quite like Utah’s. Does Utah have enough offensive firepower to beat the Beavs? Probably not. And Travis Wilson probably isn’t the second coming of Alex Smith for the U. But they don’t need to win, just lose by less than 10. That I think they can do. Who I’m taking: Utah (+9.5), A, with the Under.